steffani – February 21, 2018
This post is part of my New Year's Resolution. I realised at Christmas that I'd started to fall out of a couple of habits. (1) I haven't been finding time to read for pleasure. (2) I'm out of practice at writing short-form reviews (to be frank, I don't seem to be able to do any short-form writing at all at the moment!).

So, I have resolved to read more books just for fun, and to write short (250 words maximum) reviews of each one as I go along. These are just the books I've read because I liked the look of them - so I won't be including any books I read to 'officially' review, for academic research, for a long-form blog post, or for my radio show. The plan is to post the reviews on here each month (though, let's be honest, how long am I actually going to stick to a New Year's Resolution??).

Here are the books I read in January... 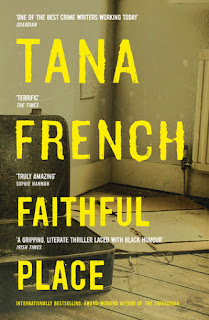 Faithful Place is the third of French’s ‘Dublin Murder Squad’ novels. I loved the first two novels, In the Woods and The Likeness (particularly In the Woods). The novels aren’t a series as such, but rather feature detectives from the same fictional squad. Each book has a narrator who had appeared as a minor character in an earlier novel. So, the narrator-protagonist of Faithful Place is Frank Mackey, who previously appeared in The Likeness. Frank is a murder detective, who is estranged from his dysfunctional family. He’s called back home on the discovery of a twenty-year-old suitcase during construction work on the estate (the ‘Faithful Place’ of the book’s title). The suitcase belonged to Rosie Daly, Frank’s girlfriend. Once upon a time, Frank and Rosie planned to elope to England, but on the night they were due to go, Rosie didn’t show up. For two decades, Frank believed that Rosie had gone to England on her own… but the discovery of her suitcase makes that seem unlikely. Frank is drawn back into his old life to find out the truth about Rosie’s disappearance. I love French’s writing, and Faithful Place is a gripping and compelling story. I didn’t like it quite as much as her two earlier books – perhaps because it doesn’t feel quite as richly layered (the earlier two were almost dazzling in the way past and present narratives intertwined), or perhaps because I found the denouement a bit predictable. Still, it was an enjoyable read and very well-written. 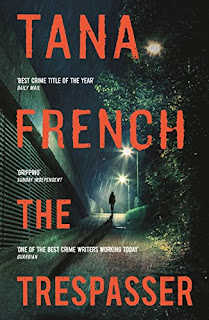 Because I can be a bit bingey with my reading, the next book I read this month was another of French’s Dublin Murder Squad novels. But I made a mistake and went straight to the sixth and most recent title, instead of carrying on in order. Good thing it’s not a straight series, eh? The Trespasser features Antoinette Conway as the narrator (she’d previously appeared in one of the books I accidentally skipped), a hotheaded detective who’s teamed up with Stephen Moran (a minor character in Faithful Place). Conway and Moran are assigned to a case that looks like a straightforward domestic, but soon discover (obviously) that there’s much more to it. I’ve got to admit, I didn’t enjoy The Trespasser as much as French’s other novels, though it was still undoubtedly well-written. Conway is a bit of a cliché – the short-tempered rookie with a chip on her shoulder, the woman fighting to be taken seriously in a man’s world – and the case itself is a little flat compared to some of the others French has created. As Conway and Moran discover the victim’s hidden depths and secrets, I couldn’t help but think back to The Likeness, which was a much richer and more compelling read. That said, I’m not giving up on French, as she’s still one of the best writers of police procedural thrillers (not always my favourite genre) that I’ve come across. I guess she just set the bar high with In the Woods and The Likeness! 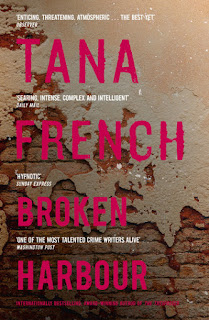 Continuing with my Tana French binge: Broken Harbour is the fourth of the Dublin Murder Squad novels. The narrator-protagonist is Michael ‘Scorcher’ Kennedy, who appeared as a minor (rather unsympathetic) character in Faithful Place. This was the best example of French’s narrator series so far. On the one hand, Broken Harbour redeems and clarifies some of the negative characteristics seen in the previous book; on the other, the presentation of Kennedy here is always shadowed by what we saw in Faithful Place. The book is in first-person, so we’re seeing the narrator through his own eyes, and it’s good to have the earlier book as a reminder of how this comes across to others. The case in Broken Harbour is multiple murder: the seemingly happy Spain family have been brutally attacked in their home. It appears that Pat Spain has snapped and killed his children, attempted to kill his wife Jenny, and then committed suicide. But (obviously) there may be more going on here… The Spains lived in a house on a ‘ghost estate’ (a housing development abruptly halted mid-construction as a result of the financial crash). French creates a setting that is paradoxically claustrophobic and desolate, to great effect. Added to this, her detective brings further ghosts to the investigation, not least his memories of the estate’s former existence as Broken Harbour, a holiday village he visited as a child. I really enjoyed Broken Harbour, certainly as much as The Likeness and almost as much as In the Woods.

Behind Her Eyes by Sarah Pinborough (2017) 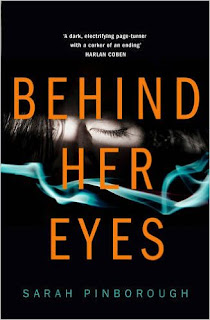 I bought my mum this book for Christmas, as I’d heard good things (and it was shelved in the bookshop next to other writers that she likes). She read it, then passed it to me. She didn’t give anything away but wanted me to read it so we could talk about the ending. Behind her Eyes was marketed on this ending – the publishers claimed it was one you would never see coming, and exhorted readers not to give anything away after they’d discovered the twist. The book is told from alternating perspectives. Mostly, it switches between Adele, the fragile but devoted wife of psychiatrist David, and Louise, a much warmer and engaging character, who works as a secretary at David’s new practice. Almost accidentally, Louise begins a relationship with David and a friendship with Adele, quickly suspecting there’s something lurking beneath the surface of their marriage. In a way, it’s a shame the publicity for the book focused on the shock ending. Ignoring the twist, Behind her Eyes is really well-written and compelling, and Louise in particular is a wonderfully crafted unreliable narrator. The growing tension of the relationships between the three main characters make for a real page-turner. But, sadly, the ending is a let-down. You don’t see the twist coming because it belongs to an entirely different genre to the rest of the novel and feels somewhat incongruous. Turns out my mum wanted me to read it so she could tell me why she didn’t like the ending. 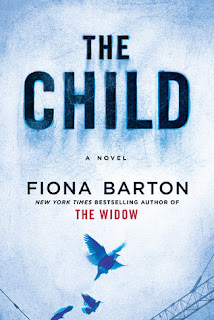 Barton’s second novel was apparently a Richard and Judy Book Club pick – and I’ve had some disappointing experiences with these in the past – but the plot description seemed right up my street. (And it’s another book with alternating first-person unreliable narrators, which appears to be my jam this month.) When the skeleton of a new-born baby is discovered during building work in London, journalist Kate Waters is intrigued and determines to find an angle on the story. Meanwhile, the discovery of the body causes anxiety for a woman named Emma, and hope for grieving mother Angela, whose daughter went missing several decades earlier. These three women are our main narrators, and we switch between their perspectives on the ‘Building Site Baby’ case. Barton’s novel is nicely readable, and the intertwining of the story’s threads is well done. I admit, I initially had a bit of trouble distinguishing Emma from Angela, but the book finds its voice(s) as the story progresses, and the decision to hold things together with Kate’s investigation was a good one. Of course, there’s more to the story than just the death of the child, and the various revelations were pretty well paced. The Child was an enjoyable and gripping enough read, which I finished in a couple of sittings. It’s a solid thriller, but I wouldn’t say it was a stand-out (and I did work out the ending about halfway through). Overall, I’d say this was a solid ‘cold case thriller’ novel, but not particularly mind-blowing.

Elizabeth is Missing by Emma Healey (2014) 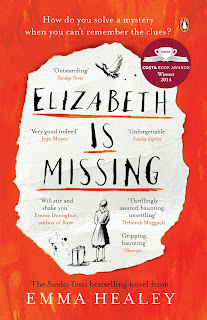 The last book I read this month was Emma Healey’s Elizabeth is Missing, a book which got a lot of praise on its publication, and which has been compared more than once to Mark Haddon’s The Curious Incident of the Dog in the Night-Time. The novel’s narrator is Maud, an older woman with dementia, who is concerned that her friend Elizabeth has gone missing. As with The Curious Incident, we are given a mystery through the eyes of someone who doesn’t actually know what it is they’re investigating, and we’re encouraged as readers to look beyond what is being described to what must be ‘really’ happening. But Elizabeth is Missing is much more than this. Despite her narration being distorted, fragmented, repetitive and contradictory, Maud is an engaging and sympathetic protagonist. As she interacts with other characters (who, supposedly, understand what’s happening), I found myself empathizing with Maud’s frustration, internally shouting at one character in particular ‘Just answer her question!’. As the story progresses, Maud increasingly sees the behaviour of others as difficult and erratic, and it’s hard not to feel the same as a reader. That said, Maud’s occasional moments of self-awareness are painful and poignant (as is the ending). But my favourite part of the book was the copious notes that Maud left for herself, in order to retain a focus on the mystery of Elizabeth’s disappearance. These made the book feel a bit like an old lady version of Memento, which I very much enjoyed. Highly recommended.