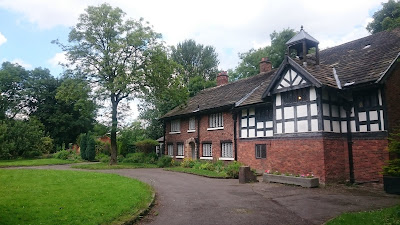 Hannah is the author of numerous short stories and poems, many of which are inspired by her love of Manchester’s history. Often dark and strange, her fiction includes ‘Nimby’ and ‘Knotweed’ (both set in North Manchester parks) and ‘Lever’s Row’ (a sort of love song to Piccadilly Gardens). Her most recent published work is ‘Dust to Dust’, a horror story inspired by Hollinwood’s Hannah Beswick, also known as the Manchester Mummy. Hannah is also the host of long-running radio shows ‘Hannah’s Bookshelf’ and ‘A Helping of History’ on North Manchester FM.

During her residency at the hall, Hannah will be running events and activities for both beginner and more experienced creative writers. She’ll also be writing and performing some original pieces inspired by Clayton Hall and its long and unique history. Watch this space for details of upcoming activities and opportunities to get involved!

Clayton Hall is a Grade II*-listed building and a rare example of a moated, medieval site. Standing on a scheduled ancient monument it is situated in Clayton Park, Manchester. The original hall was built for the Clayton family in the twelfth century. It later passed into the hands of the Byron family, of which the poet Lord Byron was a member. The Byrons lived at the hall until they sold it to two London merchants, George and Humphrey Chetham. Humphrey is famous for founding Chethams School and Library in the centre of Manchester.

Help create a Patchwork Poem at Clayton Hall this Saturday! Meet the hall’s new writer-in-residence Hannah Kate at the Heritage Open Day on Saturday 8th September, 11-4pm. Hannah will be collecting words, phrases and lines of poetry from visitors to the hall – any little scraps and patches people share during their visit. Hannah will be taking these pieces and stitching them together to create a Clayton Hall ‘Patchwork Poem’. If you’re visiting the hall on Saturday, please do say hello to Hannah and leave us a few of your words!