steffani – November 22, 2018
Okay, it's another delayed post from me. But better late than never, I guess. Another month of sticking to my New Year's resolution. I found time to read four novels for pleasure in October (though I don't appear to have been very varied in my genre choice - it's all crime fiction this month!), so here are my short reviews of the titles I read.

(You can read all the other posts from this year here: January, February, March, April, May, June, July, August, September) 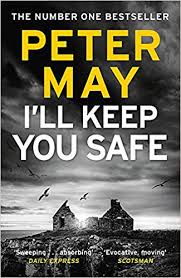 I’m a big fan of Peter May’s novels. I loved the Lewis trilogy and reread the Enzo MacLeod books a couple of times. My mum and my mother-in-law are both fans as well, and it just so happened that both of them got a copy of I’ll Keep You Safe at the same time – and then they both offered to lend me their copy when they’d finished, so I raced them! My mum won (just), so I read her copy of the book. This is a book that I’d heard May talk about prior to its completion. He described it as ‘From Paris to Harris’ (though it turns out that the Hebridean portion of the book is set in Lewis, not Harris). Ruairidh and Niamh Macfarlane are the owners and creators of the Ranish Tweed fabric brand. During a trip to Paris Fashion Week, Niamh learns that Ruairidh has been having an affair, but then almost immediately witnesses her husband and his lover killed by a car bomb. She returns to Lewis bereft, but – of course – there are further revelations to come. I do enjoy Peter May’s writing, but this wasn’t one of my favourites. I loved the flashback sections describing Ruairidh and Niamh’s relationship, but the ‘present day’ crime chapters were a bit plodding and predictable. It’s a shame, because I think I probably would have been more than happy to have read a book just about the Macfarlanes and Ranish Tweed (though that might have been less marketable!). 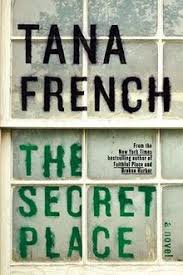 Earlier in the year, I read a few of Tana French’s Dublin Murder Squad novels out of sequence, so managed to miss out the fifth one. This month, I finally read The Secret Place. The book sees the return of Stephen Moran (a minor character in Faithful Place) and teams him up with Antoinette Conway, a prickly and unpopular member of the Murder Squad, for the first time. The book begins with Holly Mackey – daughter of the main detective in Faithful Place – telling Moran about a development in a year-old murder investigation at her school. Moran grudgingly passes the information on to Conway, but on the understanding that he’ll be able to join the investigation. The two visit Holly’s boarding school to reopen the inquiry into the murder of Chris Harper, a pupil at the neighbouring boys’ school. The prime suspects are two cliques of girls – Holly and her friends, and a rival group – and the book switches between the police investigation and flashbacks to Holly’s gang’s involvement with Chris Harper, but also (more significantly) with each other. Like In the Woods, it’s as much about friendship as it is about a murder investigation. It’s not quite as good as In the Woods and Broken Harbour, but I preferred it to The Trespasser. Oh, and ignore any reviews that criticise the so-called ‘unexplained supernatural element’ – there’s a single, beautiful sentence that explains everything towards the end of the book, which reminded me just why I’m a fan of French’s work.

The Sleeping and the Dead by Ann Cleeves (2001) 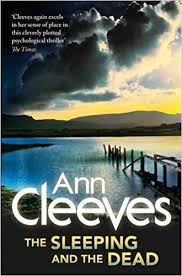 Clearly, I wasn’t feeling very experimental this month so I seem to have stuck to writers I know. The Sleeping and the Dead is one of Cleeves’s standalone novels, so not part of the Vera or Shetland series. The book begins with the discovery of a long-dead body in a lake. Detective Peter Porteous (who is quite an unusual detective, not because he has a lot of eccentric quirks, but because he’s so calm and self-contained throughout the investigation) quickly narrows down the possibilities for identification, before concluding that the body must be that of Michael Grey, a young man who hasn’t been seen since the 1970s. Michael was an enigmatic man, who arrived in the local area to live with foster parents in his final year at school. No one appears to know where Michael came from or who his family was. The book switches between Porteous’s investigation and the story of Hannah Morton, a prison officer who was once Michael’s girlfriend. Hannah reminisces on her relationship with Michael, but also finds herself drawn into the investigation more directly (and dangerously) than she’d like. I was really drawn into this story and found myself engaged with Hannah’s story (and the mysterious Michael, of course). However, I’m not sure the mystery really went anywhere. It’s definitely a page-turner, but the denouement and explanation was a little bit of an anti-climax. There was also a bit of a tricksy coincidence that had to be swallowed on the journey to the resolution. 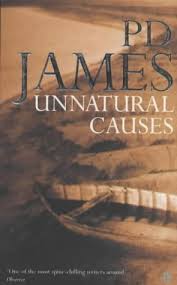 Okay, I know I sort of concluded last time that P.D. James wasn’t for me. But I got a really nasty cold towards the end of the month, and I just wanted some comfort reading (aka a whodunnit). I couldn’t find any Golden Age stuff that I fancied, so I thought I’d give James another whirl. And this one started off well. Adam Dalgliesh (admittedly not my favourite literary detective) is staying with his Aunt Jane (not Jane Marple) in Suffolk when one of the neighbours is found murdered and mutilated. The victim was a crime novelist, and he appears to have been killed with a method taken from his own writing. The other residents of the little village are all suspects, though some big crime types in that London also drift in and out of the frame. I loved the chapters in the village, with the vague air of menace that surrounded even mundane social interactions. However, the plot was at once convoluted and underexplained. I’m still not totally sure why that particular far-fetched method of murder (and the mutilation) was chosen. James isn’t too hot on clues (unlike my beloved Agatha), but I still guessed the culprit here. I also don’t quite get what was going on with Dalgliesh’s personal life. Did he break up with his girlfriend at the end? Or not? And why was he being so randomly aloof? To be fair, I’m probably going to stick with the Dalgliesh novels now – but just for completism.