On Friday, I was at Central Library, watching another play for North Manchester FM. This time, it was 2084 by theatre company Pure Expression. A (slightly) shorter version of this review aired on A Helping of History on Tuesday, but here’s the (slightly) longer version. 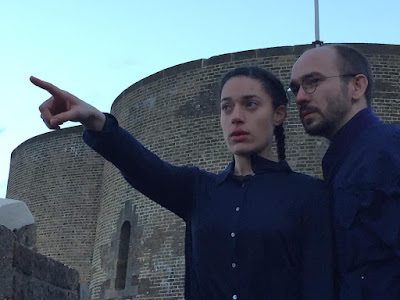 2084 is an immersive theatre performance, adapted from George Orwell’s novel 1984. It is being staged at Manchester Central Library by Pure Expression, a theatre company who specialize in adapting classic texts for unique performance environments (such as libraries, galleries and museums). Pure Expression’s last performance in Manchester was an adaptation of Mary Shelley’s Frankenstein. The current show, 2084, is directed by Rosanna Mallinson, and performed by Aamira Challenger, Robin Hellier and Simon Gleave.

When I first saw the press release, I was very intrigued by the concept of 2084. I was really keen to see how 1984 was adapted for the twenty-first century, and I was fascinated by the idea that this would be an immersive production – the show’s blurb appeared to be hinting that the audience would be made complicit in Big Brother’s hunt for traitors and thoughtcriminals. This is rather a bold direction to choose, situating the audience as new recruits at the Ministry of Truth, rather than sympathetic observers.

2084 begins wonderfully. The audience are divided into groups in the foyer of Central Library and given headsets. Soft music is pumped in through the headphones and then – something happens. I don’t like to give spoilers in reviews, so I won’t tell you exactly what happens – but suffice to say, I felt the hairs stand up on the back of my neck when it became clear the show was properly beginning.

This immersive experience has headset-wearing groups led through the grand corridors and spaces of Manchester Central Library. If you’re not fully familiar with the building, this would be rather disorienting (in a good way), but for me it was a great way to experience a building I know very well in a different way and to look at it in a different light. The performance’s opening makes good use of the space, and this was by far my favourite part of the show. (It’s worth noting, though, that this first part of the show involves a bit of running around and cramming into a lift – you have to keep up with the pack if you don’t want to miss anything.) 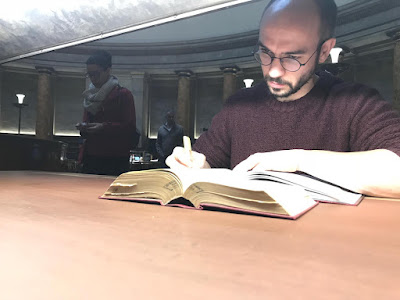 After this opening, the audience is led into one of Central Library’s performance spaces for the (somewhat) more static body of the play. At this point, we begin to experience something closer to an adaptation of sections of Orwell’s novel. The conceit is that we (the audience, that is) are new recruits at the Ministry of Truth, and that the performance we are watching is our induction – and an introduction to the power and control of the Party.

Guided through this by a Party member – a loose version of O’Brien from Orwell’s novel – we watch the unfolding story of Winston and Julia’s relationship. The production is not entirely static, with the audience being commanded to stand, move, march and salute at various times. Iconic elements of Orwell’s novel are staged – the Two Minutes Hate, Winston and Julia’s tryst, Room 101 – and the audience is invited to look on the proceedings as good Party members. These scenes are fairly faithful to Orwell’s novel, and so if you’ve read the book then you’ll know the basic trajectory the show is following.

However, I found myself frustrated by the selection of scenes being staged. 2084 centres Winston and Julia’s relationship entirely, to the exclusion of other elements of Orwell’s text. There is no mention, for instance, of Goldstein and the Brotherhood, and the Party member leading us through the ‘induction’ isn’t quite O’Brien. During the Two Minutes Hate sequence, our attention is drawn to the behaviour of the actors on the stage, rather than to the audio-visuals accompanying the performance. While the audience is encouraged to stamp and shout along, there’s no real sense of what the sequence signifies, beyond an opportunity for a clandestine encounter.

More frustrating still, in my opinion, is the presentation of Winston and Julia’s relationship as one of real romance, rather than rebellious expediency. The play essentially reimagines Orwell’s novel as a love story, with Big Brother’s greatest cruelty being the separation of two romantic idealists. For this cynical Generation X-er, it all seems a little bit… well… Millennial. Or perhaps I’m just getting more anti-individualist in my old age (how very Big Brother). 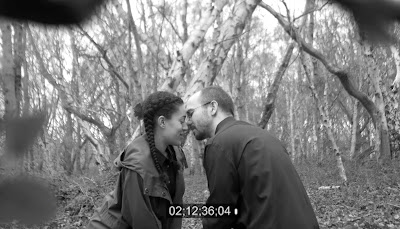 As noted above, 2084 flirts with the idea of audience complicity. The show’s conceit is that the audience are potential Ministry of Truth workers – we are being led through an induction designed to encourage condemnation of Winston’s actions. Overall, I felt that this complicity wasn’t fully developed. It was fun (in a creepy way) to see how quickly everyone got to their feet and marched on command, but this didn’t go any further. Perhaps that’s for the best… the Room 101 sequence was (as expected) fairly disturbing, and it was probably best that the audience watches as shocked witnesses rather than an involved mob. Nevertheless, I was somewhat disappointed at the show’s ending: it reveals something of a misconception about how groupthink and complicity work in Orwell’s, and seems to imply that the Party would be looking for unusually cruel individuals, and not an acquiescent herd. Still, it provoked a grim laugh, which was much needed.

I found myself wondering why this production was titled 2084, rather than simply 1984, given that it is an adapted (rather than updated) version of Orwell’s novel. However, while I had some frustrations watching the show – particularly around the rewritten ending – I’ve found myself thinking about it a lot afterwards. It’s really made me think about the representation of individualism and selfish desire in Orwell’s novel and in dystopian fiction generally – and it’s encouraged me to reflect on why, exactly, I am so unsympathetic to a version of the story that has Winston and Julia fall truly in love.

Ultimately, theatre should be thought-provoking – even discomforting – and 2084 is certainly that. It’s also an entertaining and fun way to experience the grandeur of Manchester’s Central Library. Cynical Orwell-purists (like myself) may find it annoyingly selective in its adaptation, but it’s certainly an interesting production and worth experiencing.

2084 is on at Manchester Central Library until 14th February.